Posted on April 19, 2008 | Comments Off on Political Process 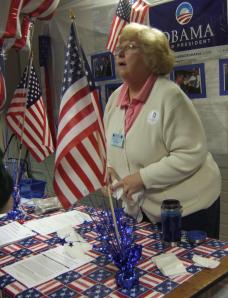 This morning I joined 1500 other Clark County Democrats at the County convention as an alternate for Obama. (This not me in the photo…) Although I’m a precinct officer, I missed out on being an official delegate because I was too busy running the caucus in February to volunteer. Today all my precinct delegates must have showed up, so no alternates were needed.

It was an exuberant crowd and there are some fine candidates running for state and local offices. We heard from them, then went into an interminable certification process – I left since I had no further role, but I got reports from friends that it didn’t break up till ours later than it was supposed to.

Democracy is cumbersome and untidy. Our caucus process is under attack by some who think it’s way too unwieldy. But after watching how it works to bring people out and energize them, I don’t want to go to a primary only. The trouble is, primary voters are much less committed to the party’s principles (all they have to do is mark some Xs on a ballot and drop it in the mail).

In the Feb. caucuses the county went 2 to 1 for Obama – with the most enormous turnout ever! Folks who come out for a caucus are hard-core, and tend to be more liberal. They get energized by being with other like-minded folks and become the foundation of the worker-bee army that is required in an election year.

I saw that again today, although I don’t know how folks felt if the convention wasn’t done till 4.

Comments Off on Political Process