Posted on June 9, 2008 | Comments Off on Pigpen particles

Pigpen: one of Charles Schultz’s great characters. He walks around in a cloud of dust particles – spreading them everywhere he goes.

Particle:a minute quantity or fragment of something 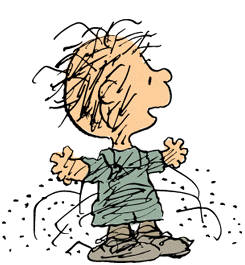 Sometimes I have so much going on in my head that I feel like Pigpen. Except the cloud of particles surrounding me is not dirt, it’s partial thoughts. All the incompletes that I’m trying to hold in my mind. It makes it hard to move forward.

I should be free of extraneous thought-particles. I keep lists. Lots of lists. Lists of my lists. But sometimes lists aren’t enough to clear the mental air.

My lists missed two important requisites of particle-clearing: the big picture (the view from 5, 10 or 50 thousand feet) and next ACTION steps.

This morning I got out my colored pens and a big piece of paper and did a mind-map brain dump and began to see a pattern in my particles. And I also began making a list of what’s the first (however small) next step that is keeping so many of my projects stuck at the gate – making the phone call, locating the missing piece of information, scheduling those next ACTION steps.

Talk is cheap. Lists are easy. Action is (well) ACTION.

Comments Off on Pigpen particles